Earth Day and the Sustainability Industry

Earth Day and the Sustainability Industry 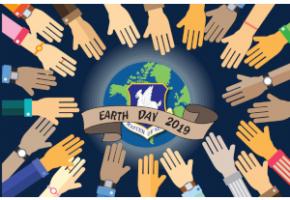 I was a sophomore in high school, in the early 90s, when I first heard about Earth Day. I jumped on the tree hugging movement gladly, and adopting the “Reduce, Reuse, Recycle” phrase as my mantra. I frequented a shop in downtown Portland, OR, that sold earth friendly items, many that had phrases or images intended to encourage others to save the earth (or at least antagonize the ones who didn’t want to!) My favorite item was a t-shirt made of sustainably sourced, organic cotton with a screen-printed image of the Earth on it, and the phrase, “Save Me Before It’s Too Late”. Before it was cool to ditch the plastic straws and bags, I was getting in people’s faces to tell them how bad plastic is. I shopped at a well-known natural cosmetic store found in most malls, thinking I was saving the world by purchasing over-priced, but wonderful, cosmetics that were made by the “world’s most ethical and sustainable global business” (the fact that the company is still going strong and that I still love the products does speak to their values and commitment to bettering the world). I did everything I could do in my state of being a teenager to save the earth. Earth Day was my introduction to sustainability and environmentalism. But I just recently learned that Earth Day wasn’t a new concept back in the 90s, like I naively thought.

Earth Day was relegated to the tree huggers and hippies of the world when it began in 1970. It was founded by Gaylord Nelson, who was a U.S. Senator from Wisconsin at the time. He witnessed the ruin from the 1969 oil spill in Santa Barbara, California and wanted to somehow take the same level of energy poured into the anti-war movement and pour it into saving the earth. At the time, public understanding of air and water pollution was growing, and he felt it was an opportunity to encourage the government to wake up and pay attention. The first year, it was called a “national teach-in on the environment”, and according to Earthday.org, “On April 22, 1970, 20 million Americans took to the streets, parks, and auditoriums to demonstrate for a healthy, sustainable environment in massive coast-to-coast rallies. Thousands of colleges and universities organized protests against the deterioration of the environment. Groups that had been fighting against oil spills, polluting factories and power plants, raw sewage, toxic dumps, pesticides, freeways, the loss of wilderness, and the extinction of wildlife suddenly realized they shared common values. Earth Day 1970 achieved a rare political alignment, enlisting support from Republicans and Democrats, rich and poor, city slickers and farmers, tycoons and labor leaders. By the end of that year, the first Earth Day had led to the creation of the United States Environmental Protection Agency and the passage of the Clean Air, Clean Water, and Endangered Species Acts. This is how Earth Day functioned, for two decades. But then as the 90s were approaching, Denis Hayes was asked to organize another big push for Earth Day, except on a global level this time. Two-hundred million people across 141 countries were reached in on Earth Day 1990, boosting worldwide recycling efforts and opening up the opportunity for the 1992 UN Earth Summit.

Then, Earth Day 2000 took on the issues of global warming and clean energy. Hayes organized a new campaign that included 5,000 environmental groups in 184 countries, sending world leaders the loud and clear message that the world wanted action taken now regarding these issues. Between 2000 and 2010, the climate issue intensified with people denying climate change, special interest lobbyists gaining more funding, politicians who were hesitant to be vocal about climate change, and climate change becoming a divisive political belief which made it so less action took place. Yet, the discussion of and action for Earth Day and all it stands for is still relevant. So as the 49th Earth Day happened this week on April 22nd, the AEC and manufacturing community should ask ourselves, “How are we positively impacting the earth and is it enough?”

Earth Day in the Sustainability Industry

As discussed in a previous blog, ‘Climate Change, Part 5: It’s All About the Straws, Isn’t It?', buildings are one of the top five contributors to climate change, coming in last behind electricity, agriculture, manufacturing and transportation. However, a 2018 Global Status Report issued by the United Nations, the building sector is responsible for nearly 40% of global carbon-dioxide emissions and 36% of final energy use. However, it also says that, “Heating, lighting and household cooking are the most improved building end uses.” This suggests that sustainable best practices in the built environment may be making an impact. With the various certification programs available, the most well-known one being LEED, we are trying to do better with the buildings we create, especially as LEED continues to improve itself with the newest LEED v4.1 release, which claims that it is:

•Bigger: LEED v4.1 is for all – it is more inclusive with updated referenced standards and allows projects to earn LEED points through building performance monitoring.

•Stronger: LEED v4.1 continues to drive performance, fully integrating performance outcomes supported by new methodologies and a simple data-driven path so that you can measure performance on an ongoing basis.

•Bolder: Lessons learned from those in the market using LEED v4 and over the last twenty years have led us to take a deeper look at existing buildings, residential projects and cities to develop unique solutions that address unique markets.

…buildings are one of the top five contributors to climate change, coming in last behind electricity, agriculture, manufacturing and transportation…the building sector is responsible for nearly 40% of global carbon-dioxide emissions and 36% of final energy use. However, it also says that, “Heating, lighting and household cooking are the most improved building end uses.” This suggests that sustainable best practices in the built environment may be making an impact.

And LEED isn’t just for buildings. Anyone can become a LEED Green Associate and use that knowledge in various industries. We offer a free LEED Exam Prep course that can help you prepare for the exam, or even just give you an idea if it’s something you’d want to pursue. This blog post also explains exam prep for LEED v4.1.

Next year, Earth Day celebrates its 50th anniversary, so how can we hold true to the cliché that “every day is Earth Day”?

“Every Day is Earth Day”

Some ways that they are doing this is:

1. Green Rating Systems: Besides LEED, there is the Green Building Initiative (GBI), Green Globes, NAHBGreen by The National Associate of Homebuilders, Energy Star, Living Building Challenge, and Passive House which was explored in a previous blog, ‘The Insider’s Guide on Getting Specified for Passive House Projects’. There are multiple ways for a building project to go green. Most of these programs offer credit for products and procedure that are green from cradle to grave or cradle to cradle too, meaning how something is sourced and manufactured can be as weighty as how it is used and the impact it has during use.

2. Materials Choices: Using products that are reclaimed, recycled, or sustainably sourced. Using salvaged materials is becoming easier, too, as discussed in this article which is from 2007, but even more relevant now. Many cities offer centers like ReBuilding Center of Our United Villages, a non-profit in Portland, OR, that not only help the environment by reusing building supplies, but also give back to the community.

3. Recycling as a Business Practice: According to an article in Construction Business Owner title, ‘Recycling Construction Materals’, the discarded materials from residential or commercial sites, concrete, drywall, wood, metal and cardboard make up 70 to 95 percent of them. Recycling building products helps reduce costs both with purchasing and disposal and contributes positively to the life cycle of product resources.

Earth Day may be just another way to add a holiday to the calendar, but it can also be used to check ourselves, to make sure as consumers, as humans, and as business people, that we are doing all that we can to make the world more sustainable. Personally, looking at it from the perspective of this industry I’m now part of, encouraged me to dig deep for that naïve, hopeful teenager from the 90s and double-down on my efforts toward sustainability.

Did you do anything to commemorate Earth Day this year, either personally or in your business?