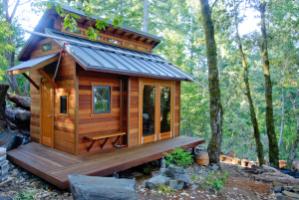 It’s hard to preach about sustainable living when just owning or renting a home seems to be a hardship for more people than not lately. Who can think about sustainable choices that may cost more, when it's a struggle to pay the rent or mortgage? So when I write about habits that save electricity or water, or leave a smaller carbon footprint, I do so in the spirit of saving the earth, battling climate change AND saving money. It's as much about trying to live on a sustainable budget as it is about saving the earth. It isn’t cheap to live a 'standard' life anymore, and the rat race of chasing the American Dream is contributing to the well of mental and physical health problems more people face. Cost of housing aside, one option available to minimize living expenses is to live in a tiny house. These are popping up in the news lately as well as on HGTV and in magazines, no longer as a quirky thing some minimalists or hippies choose to live in, but as a solution to the housing AND the homeless crisis.

So, What’s the Big Deal with Tiny Houses?

The tiny house movement has really become a social movement, because of the base philosophy behind it that encourages a minimalist existence and all the things that go along with that. According to the website, The Tiny Life, the most popular reasons for joining the movement are environmental concerns, financial concerns, and the desire for more time and freedom. So, what are the benefits to living smaller?

1. Lower expenses: Not just for initial purchase price, but also for monthly living expenses. Multiple sources checked show a tiny house costing around $23,000 to purchase or build, with that number fluctuating greatly depending on variants such as permit costs, materials used, labor costs, and choices made regarding insulation, electricity, and plumbing. But The Tiny Life reports that 68% of tiny housers own their homes outright, so typically there is no mortgage or its hidden costs. If there is a monthly payment of any kind, it’s typically much lower than a standard mortgage would be. The cost of utilities is lower, the upkeep costs are usually lower, and the energy spent maintaining a large dwelling is also lower.

2. Freedom: For the tiny houses built on wheels, like a trailer, there is freedom to move from place to place. Also, because the costs are lower, tiny house owners find more time and more money available to spend on other endeavors.

3. Investment in a higher cause: Living the tiny house life also means joining a “club” of like-minded people, many who hope they are making a difference somehow by their choice to live a smaller existence.

One of the challenges of a tiny house is figuring out how to pay for it. A standard mortgage isn’t an option for most, and even insurance is a different situation because tiny house living falls into the grey areas of how we do currently do housing. Tiny houses are often sold as modular homes, and even Amazon has ventured into the modular home sales arena. So, like traditional housing, there are many options to acquiring the home.

But figuring out how to pay for it often feels like small beans compared to figuring out where to settle a tiny house. Most cities and towns make it difficult to build a tiny house because of zoning laws. Either they aren’t specific enough, allowing a governing agency to disallow tiny houses the option of a standard lot or even planting in the backyard of someone else. But people are finding ways around these laws and cities are catching up to the benefit of allowing tiny houses.

Cost of housing aside, one option available to minimize living expenses is to live in a tiny house. These are popping up in the news lately as well as on HGTV and in magazines, no longer as a quirky thing some minimalists or hippies choose to live in, but as a solution to the housing AND the homeless crisis.

The Spruce offers a list of tiny house communities that have found a way to exist. A highlight of a few:

1. Green Bridge Farm in Effingham County, Georgia—The center of this community is an organic farm in the woods. Tiny house owners can purchase a one-acre lot for their homes starting at $30,000, with smaller plots available for lease at $300 per month.

2. Orlando Lakefront at College Park in Orlando, FL—For a variety of reasons from zoning laws to insurance for towing, tiny houses on wheels need to meet classifications for towable recreational vehicles. So many R.V. parks are finding new life by welcoming these roaming homes, like the Orlando Lakefront at College Park in Orlando, Florida. It currently hosts 13 tiny houses with room for around 40 more.

3. Salida, Colorado and Walsenburg, Colorado—Sprout Tiny Homes in La Junta, Colorado is spearheading two projects. The largest development is in Salida, Colorado, with 200 rental homes making it the largest tiny house community in the nation. The second project is a subdivision in Walsenburg, Colorado with 33 tiny homes. Both tiny house communities will be walkable neighborhoods with retail spaces and shared amenities including a fitness center and plenty of green space.

4. St. Paul, Minnesota—A community of tiny houses on permanent foundations with all 36 units will packing sustainable features that will reduce their carbon footprint by up to 93 percent compared to the typical U.S. home.

5. Sonoma County, California—Jay Shafer became the face of the tiny house movement after he wrote the Tiny House Book in 2009. Currently, he's developing the first tiny house community in California's Sonoma Wine Country. It will be zoned as an R.V. park and will cater to small towable houses.

But tiny house villages aren’t just helping to heal the earth through sustainable living, or heal finances through smaller costs. There’s also some villages that are working toward healing people.

Quixote Communities is a group tiny houses that offers permanent and supportive housing for homeless adults, including those that suffer from mental illness, physical disabilities, and recovering from addiction. Its flagship community for the homeless opened in 2013 in Olympia, Washington, and they have two more communities in the works—Orting Veterans Village in Orting, Washington, intended for homeless veterans on the Soldiers Home campus; and Shelton Veterans Village in Shelton, Washington, intended for men and women veterans.

Dignity Village and Hazelnut Grove, both in Portland, Oregon, were established as tent-cities and became membership-based communities providing shelter off the streets. In the last year, community organizations have partnered with Dignity Village to build four tiny houses, replacing older structures that were unsafe and falling apart, in part using salvaged materials. Likewise, the Grove has been building tiny homes on site and plans to add more.

These communities underline the complications related to location and tiny houses. Obviously, planting yourself on public land and invoking squatter’s rights isn’t the ideal way to handle homelessness. But it also invites discussion on how tiny houses can be used to help solve homelessness, and in turn have an impact on addiction and other challenges homeless people face. It also stresses the relationship between having a place to live and dignity; it is hard to do better for yourself when you haven’t got a safe place to lay your head. This is also true for the millions of people in America who have a place to live but worry from month to month if they’ll continue to be able to afford the cost of living there. Tiny houses have a lot of positive options to offer the world of sustainability AND affordable housing. Hopefully, it’s a philosophy and movement that can continue to contribute to forward growth, and not become an overpriced novelty.

What are your thoughts on the tiny house movement? Do you think it has potential to impact the environment and society in a positive way?