Samurai Specifications: How Product Manufacturers Can Survive The Pandemic Battlefield

Samurai Specifications: How Product Manufacturers Can Survive The Pandemic Battlefield 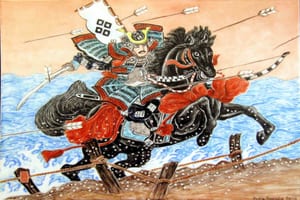 The COVID-19 pandemic has wreaked havoc across the construction industry, resulting in massive layoffs, canceled and postponed building projects, and significant economic damage that will last for years. Building product manufacturers have been especially hard as the crisis has decimated the AEC landscape and left many in economic trouble and a few on the verge of collapse. We will explore strategies to combat market share loss and succeed during the crisis.

Miyamoto Musashi was a famous swordsman, strategist, and writer who lived in 17th century Japan during the samurai period. Musashi became famous for his two-sword style duels where he defeated a total of sixty-one combatants over the course of his life. In the latter part of his life he wrote his treatise, The Book of Five Rings. Musashi’s first duel took place when he was thirteen years old. His opponent was much older and used a sword, however Musashi defeated him with only a staff.

Although Musashi was one of the greatest swordsmen in recorded history, he also excelled in sculpting, calligraphy, and architecture. In The Book of Five Rings, he emphasized that samurai should understand other professions as well. In the book, he compares his concept of strategy to a foreman carpenter. Musashi wrote, “Like a soldier, the carpenter sharpens his own tools. He carries his equipment in his tool box, and works under the direction of his foreman. The foreman carpenter knows his tools and men so well that he is able to guide them; delegating who does what based on their abilities, while also being aware of their morale. The foreman carpenter, if he wants the better finished product, will treat his men in such a way as to receive their best work.”

One of Musashi’s key teachings that applies to building product manufacturers is adaption. Musashi started that just as a carpenter needs to be able to use his tools according to plans, so too must a strategist be able to adapt his style or technique to the required strategy of the battle he is currently engaged in. Manufacturers must have the right tool for the job during this crisis. Manufacturers who are able to adapt to conditions on the ground will succeed, those that don’t, will cede market share and may even go bankrupt.

The challenges facing building product manufacturers run the gamut. They include not being able to reach architects and specifiers, projects being postponed and cancelled, and diminishing revenues which lead to lay-offs. There are solutions to these issues, but many tradition-bound manufacturers may have a difficult time adapting to these new circumstances. Here are strategies that manufacturers can use to adapt to the current crisis.

The bottom line is that building product manufacturers need to adapt to survive and thrive in the short term and long term. As Musashi once said, “anyone can give up, it’s the easiest thing in the world to do. But to hold it together when everyone else would understand if you fell apart, that’s true strength.”